It's officially football season! While I'll be spending the first Sunday of the season out with friends at a local dive to watch the games, I thought I'd share a great recipe for game day. And even better - this one is super easy to make!

A few months ago, we had a game night at the apartment, and I had seen a recipe earlier in the week over at Brown Eyed Baker for bacon wrapped jalapeño poppers. I LOVE everything about jalapeño poppers. And what's not to love? The heat from the jalapeños, the creamy cheese filling, the delicious fried coating. But these... these involve bacon instead of deep frying them. And come on, who doesn't love bacon?!

Now, I'm a huge fan of cheese. The more cheese, the better in my book! So I've actually changed the original recipe a bit - and I was absolutely thrilled with the results.

Cut the jalapeños in half, lengthwise, and remove the seeds and membranes.

In a medium sized bowl, combine the cream cheese and shredded cheese until well mixed.

Bake in the preheated oven for 20 to 25 minutes. If the bacon does not look browned enough, you can put it under the broiler for a few minutes just to finish it up.

Now eat all of them before your family tries to steal them from you!


Every Monday night, my roommate and a friend of ours have a nice ladies night. It typically consists of hours of Once Upon a Time, and delicious food. Sometimes too much wine. Recently, I've been in charge of desserts. Not that I mind - I LOVE making desserts. I've been trying to be a bit healthier recently, though, and that tends to prove problematic when trying to come up with dessert ideas. This time, I was really craving strawberry shortcake, and spent the afternoon brainstorming how to make it just a bit healthier. Then it hit me: no heavy cream. I decided to whip coconut cream, instead of heavy cream, to make a delicious whipped topping. And then I decided to get a little crazier, and roast about a third of the strawberries. Let me tell you: that was a great decision. I could have had five plates of this, but I behaved!

Directions:
Preheat the oven to 400 degrees F. Line a small rimmed baking sheet  with parchment, and set aside. Set a bowl in the freezer for making the coconut cream.

Toss 1 cup of the berries with coconut oil and vinegar (don't worry if the oil is clumpy), and arrange on the baking sheet. Roast for 15 to 20 minutes, or just until the juices begin to release and the edges darken. Set aside to cool.

Toss the roasted berries and any juices with the remaining fresh berries, and sugar or honey if using, and set aside.

To make the coconut cream, remove the can from the fridge, leaving it upside-down and being careful not to jostle it. Use a can opener to open the bottom, pour off the translucent liquid, and reserve.

Scoop the thick, white coconut cream into the chilled bowl. Whip on medium speed until mixture is smooth and creamy. Add a drizzle or two of the reserved coconut liquid to smooth things out.

Layer strawberries and cream on pound cake, and enjoy immediately! 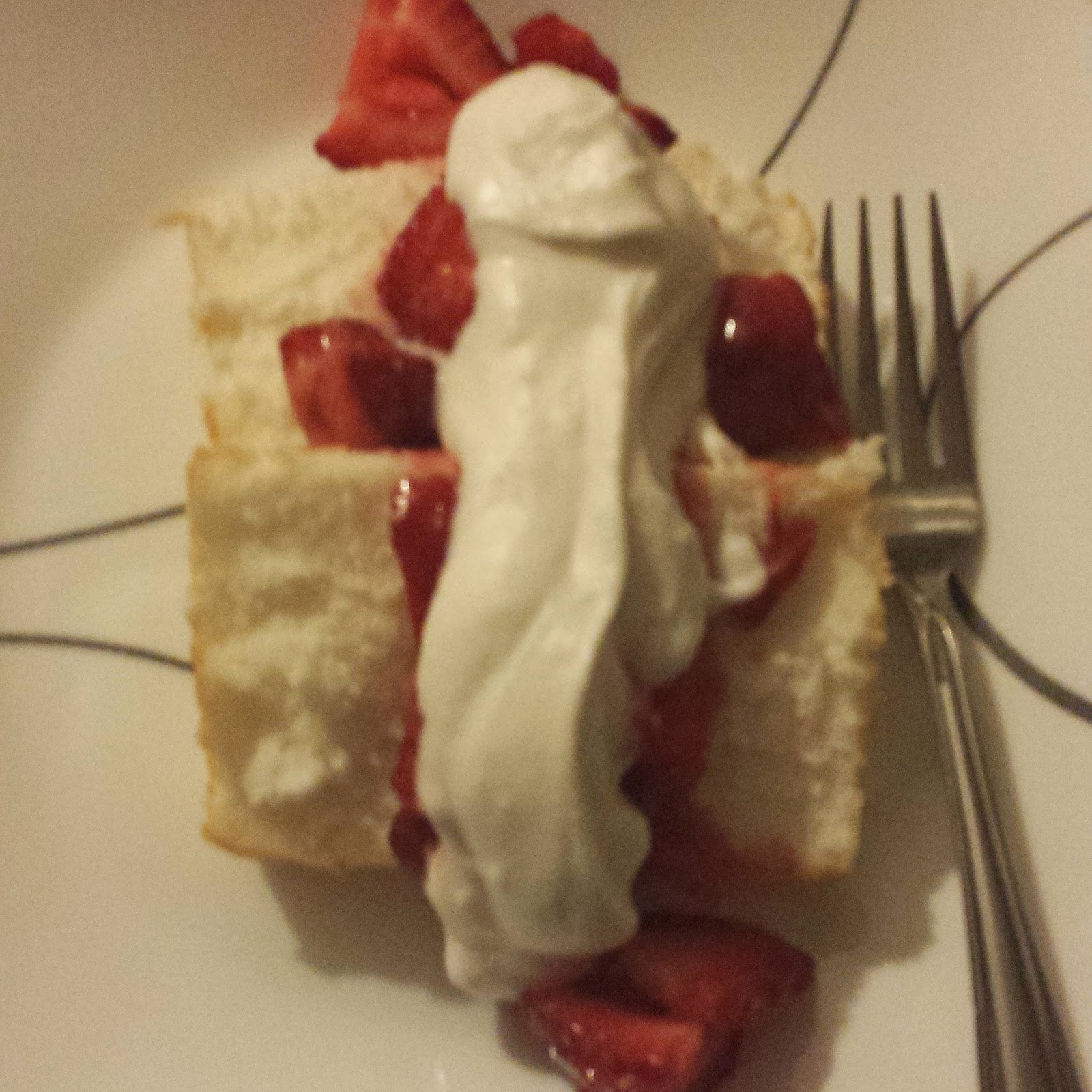 Posted by Unknown at 6:21 PM No comments:

A few months ago, while cooking a pork loin with a grape white wine reduction, I had a sudden epiphany: I want to do this for a living. I was cooking dinner for my roommate and a friend, and I just zoned in on cooking. Nothing else mattered. Just me, the food, and the kitchen. Moving from counter to pot to fridge and back, I felt comfortable and oddly satisfied for the first time in, well, a long time. The fluid movements my body makes while I'm cooking gives me a feeling I couldn't possibly put into words. It almost feels like home. I always knew that I enjoyed cooking. I'd even say I always knew that I loved cooking, but on this particular day, I finally realized just how much it meant to me.

I started baking a lot again, and cooking every chance I had. I started eating at new restaurants instead of the same bland places I'd gone to for so long. And, finally, I started looking into cooking school. Living in the Hudson Valley gives me the wonderful advantage of having the Culinary Institute in Hyde Park so close. Unfortunately, it's a pretty steep tuition, and they require six months of restaurant experience prior to enrollment. So I've enrolled in the local Boces program in a chef essentials course. Hopefully, this will get my foot in the door to the experience necessary for the Culinary Institute.

I'm always trying new recipes, and adding my own ideas to them. And I'm always criticizing every meal I have out, so I think it's time I put the pen to paper (or, I guess, my fingers to the keys), and share it with the world. I can't promise daily updates, or maybe not even weekly updates, but be sure to check back frequently. I do have some tasty recipes in store!
Posted by Unknown at 6:20 PM No comments: